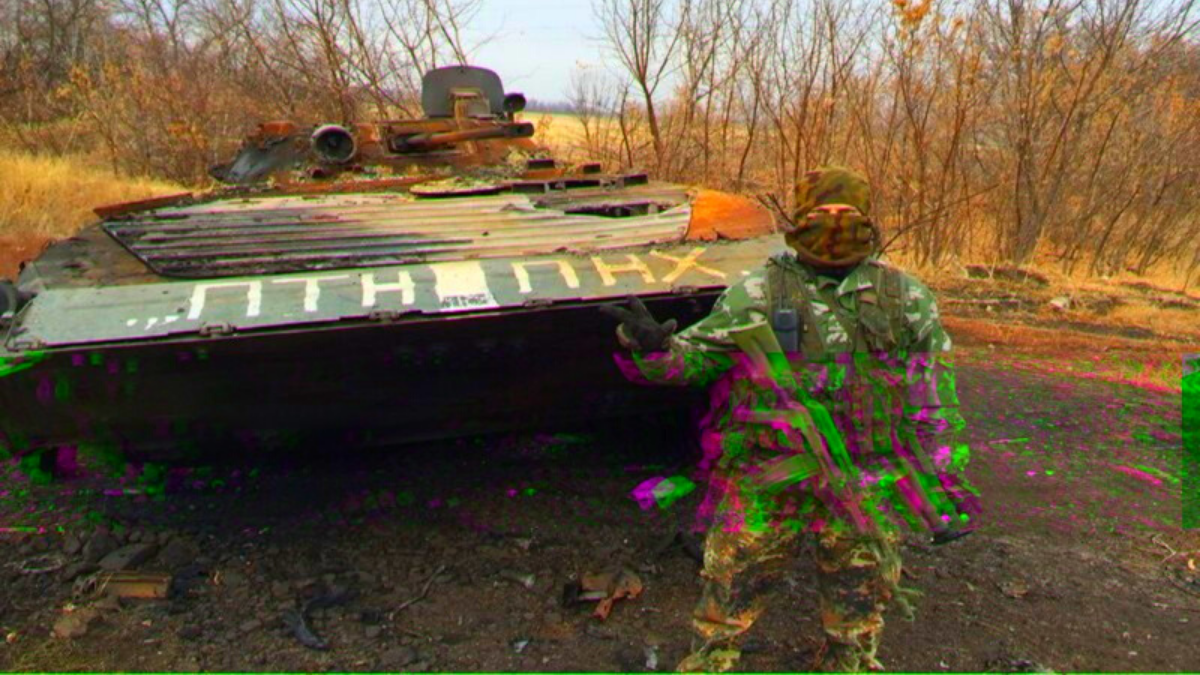 This combat footage from 2014 is another example of the devastating effect of landmines used in the war in Ukraine following our article on the Ukrainian soldier stepping on a landmine, all of which was caught on his GoPro camera. The footage is filmed by Ukrainian troops locked in a fierce firefight in the village of Pesky in the Yasynuvata district of Donetsk. As a speeding Ukrainian BMP-2 passes the men, it hits an anti-vehicle mine and is obliterated.

If you’re wondering what the Ukrainian troops say towards the end of the clip in the basement, the first guy says: ”Pickled vegetables, who wants some guys?” and the second asks ”Is there any salo?” (traditional Ukrainian delicacy of salted pork fat).

The footage of the speeding BMP-2 hitting a landmine is a segment from a longer documentary called “Hospitallers – Heart of the Volunteer”. It’s a documentary dedicated to volunteer medical troops that serve in the war in eastern Ukraine. The full documentary can be seen here.

Mines in the War in Ukraine

The War in the Donbass region of Eastern Ukraine has been running for over 5 years now. It is a largely conventional armed conflict between Ukrainian government forces and Russia-backed separatist militias. The war has killed over 13,000 people and injured and displaced many thousands more.

Ukraine ranks third in the world for mine-related casualties, behind Afghanistan and Syria.

From the grim statistics, over 1,600 of these people died or were brutally injured due to unexploded ordnance (UXO) or landmines. As we write this, it’s estimated that over 2 million civilians, including 220,000 children, live at or in close proximity to territory littered with unexploded ordnance and both anti-vehicle and anti-personnel landmines. Rural areas are particularly affected by the threat of mines as well as areas adjacent to roads and civilian areas, with next to no warning signs in place.

Despite both sides in the War in Ukraine sporadically carrying out mine clearance, the overall number of mines is unlikely to decrease due to the regular deployment of new ones. According to the Green Political Foundation, acting Ukrainian legislation also creates additional bureaucratic barriers, as it restricts significantly international organizations from actual mine clearance operations.

Reaper Feed was operational in covering the conflict in Ukraine as early as this year. You can read about our road trip speeding along the so-called Road of Death where we avoided an array of landmines and unexploded ordnance that litters each side of the highway between Mariupol and Donetsk.

Origins of the War in Ukraine

In 2014 as the pro-Western Euromaidan revolution swept across Kyiv and wider Ukraine, the government led by Viktor Yanukovych collapsed. In contrast to the Euromaidan protests, pro-Russian protests in the south-eastern regions of Ukraine, particularly Donetsk and Lugansk regions. These soon began a speeding course into full-blown separatist movements

Some of the most infamous battles took place at the recently built Donetsk Airport and the city of Debaltseve. In a vain effort to stop the carnage a new agreement was drawn up in February 2015 called Minsk II. After it was signed, separatist forces launched a mass assault on the strategic city of Debaltseve and pushed Ukrainian forces out. Since then, the war has ground to a stalemate with people still being killed every month. Various international fighters have become involved on both sides.