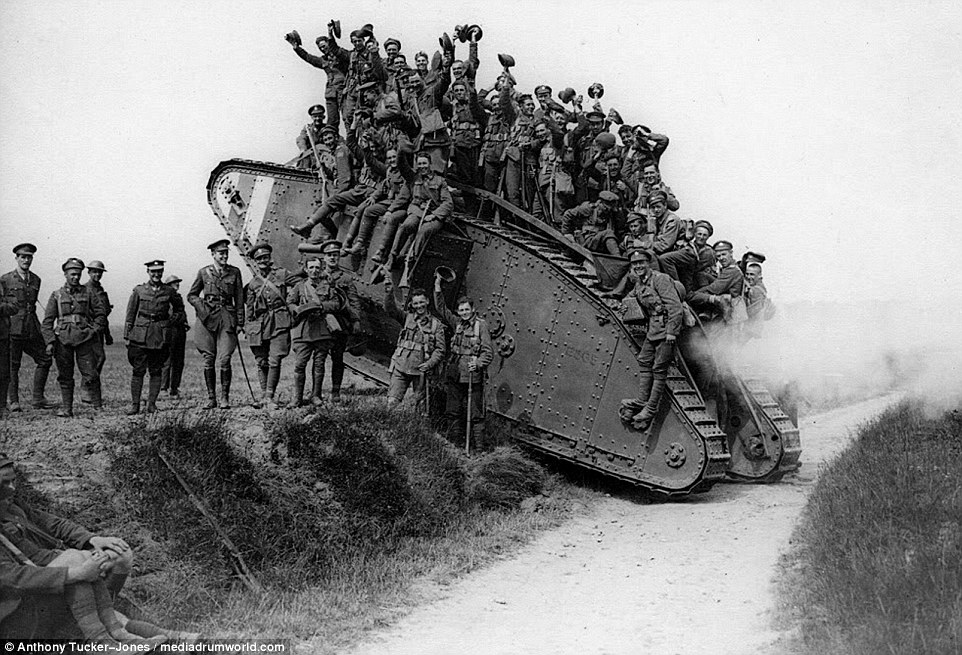 “My blood froze in my veins.  Crawling along the cratered battlefield were two mysterious monsters.  The monsters approached slowly – limping, staggering, swaying – but no obstacle could stop them.  They moved ever forward with a supernatural force.  Our machine-gun fire and hand grenades simply bounced off them.  They were thus able to easily destroy our crews in the forward shell-holes, then run straight through the German front line and off into the village of Flers. The British infantry which had followed them took possession of the village, and the machines drove off down the Ligny-Tilloy road.”

By the middle of World War 1, the gruelling trench warfare on the Western Front had collapsed into a bitter stalemate. The stretch of treacherous earth that separated the opposing sides, known as no man’s land, was now an obstacle course of craters, barbed wire and corpses. Both sides knew that a revolutionary creation was needed. A vehicle with the ability to cross the no man’s land without being cut down in the process, breaching the enemy line and allowing fast-moving cavalry to pour through and surround the enemy from behind. What was needed, was a tank.

The British had begun work on the top-secret operation of creating the world’s first tank in around 1915. The vehicles were initially called “Landships” but soon changed to the term “tanks”, in order to preserve secrecy. The term was chosen due to factory workers calling the initial prototypes “the tank” due to it resembling a steel water tank.

British tank production was carried out at Metropolitan Carriage and Wagon in Birmingham. The plant built hundreds of revolutionary fighting vehicles designated as Males and Females. Males were more heavily armed carrying a 6 pounder Hotchkiss artillery gun on each sponson as well as three light machine guns. Female variants of the Mark V were armed with two Vickers heavy machine guns only. As the war progressed and the Germans invented their own version of a tank called an A7V, some British tanks were converted to Hermaphrodites through fitting a male and female sponson on each side to ensure that they would not be outgunned.

Once revealed to the battlefield, the British press reported that the revolutionary weapon was capable of storming through concrete buildings and traversing wide rivers with ease. The reality, however, was quite different. The tanks generally moved at walking speed and whilst well protected from the enemy rifle and machine-gun fire, it was vulnerable to direct artillery hits. Operating the tank inside was extremely tough due to extreme temperatures of up to 50°C and air filled with poisonous gases from the engine and weapons firing combined with little ventilation. Tank crews were often knocked unconscious inside after generally unfit for combat after three hours inside the vehicle.

Whilst 8mm armor largely protected the tank from small arms fire, the Germans had developed armour-piercing K bullets that could tear through the tank’s armor. Thus, the WW1 tank mask was born out of the necessity of tank crews to protect themselves from these bullets as well as shrapnel or fragments whilst inside the tank. Medieval style masks with chainmail and eye slits were created and resembled something from a horror movie. Although the Germans had been horrified at first, the scenes of them surrendering en masse to tanks soon faded as they began to grow bolder against these new fighting machines. Infantry units armed with bunches of stick grenades bundled together for a much bigger explosion were tasked with overrunning British tanks.

“Their courage was extraordinary.  Despite being under fire from the vehicle’s machine guns, they tried in desperate fury to storm the mobile armored fort and kill its crew.  They lifted each other up, climbed on board, searched its hatches and portholes, and fired their weapons into the slots.”

Despite the rough beginnings, tank warfare soon began to change the war for the allies. The Germans built their own tanks but were outnumbered industrially and couldn’t match the output of the Allied tank production. 288 Mark V tanks penetrated the German lines during the Battle of Amiens in August 1918, this was the foundation of modern armored warfare and signaled the end of trench warfare as a primary combat tactic.

Following the end of World War 1, combat for the tank was far from over. Around 70 Mark V tanks were sent East in order to assist the White Army during the Russian Civil War. Following the collapse of the Romanovs and the subsequent Bolshevik victory, the tanks were captured by the Red Army and utilized during their invasion of Georgia, allowing them to capture the capital Tbilisi.

In 1941 during the Second World War, the Red Army once again utilized the tanks in desperation during the defense of Tallinn, Estonia. In a futile attempt to stop the German advance, four Mark V tanks were soon overrun and scrapped afterward. As WW2 drew to a close in 1945 and the tables had turned on the Germans, the desperate remains of the Third Riech had utilized two Mark V tanks in an attempt to slow the Russian invasion. The tanks had been originally sent to assist in the Russian Civil War before being placed on a monument in Smolensk and subsequently captured during Operation Barbarossa.