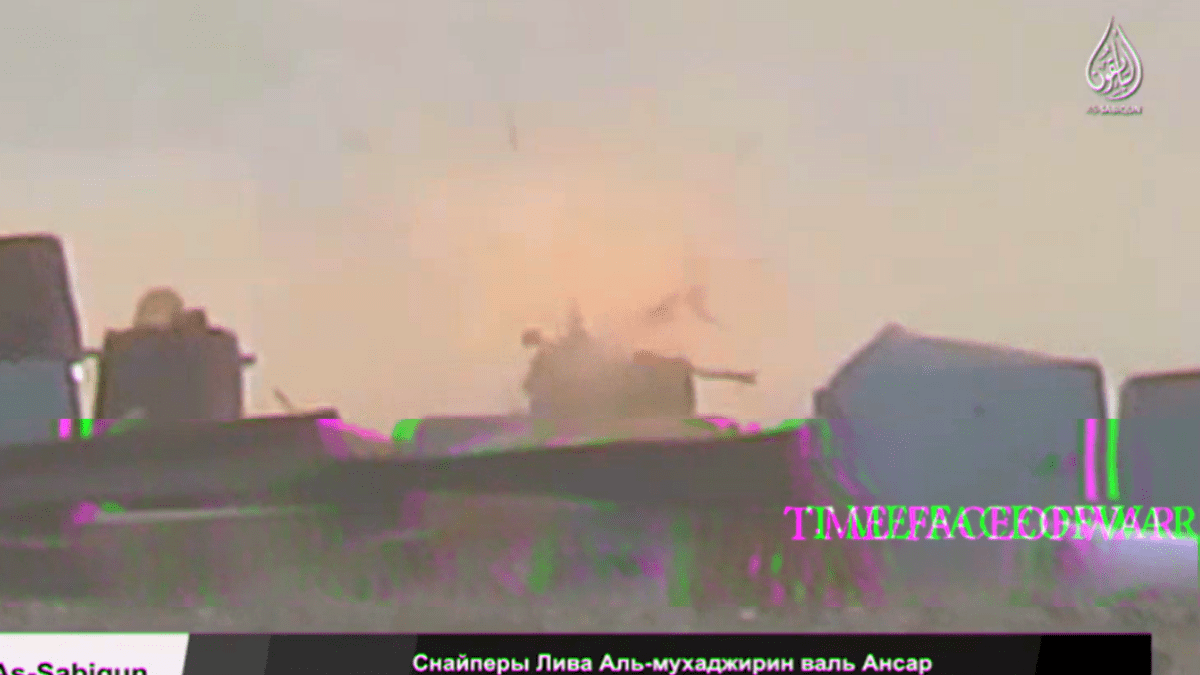 Combat footage from the Syrian Civil War shows a militant from the Val-Ansar inflict a grueling headshot on a Syrian Arab Army machine gunner whilst he is in mid-burst with a Soviet-made DShK heavy machine gun. The sniper and those around him can be heard speaking in Russian, signaling that they are likely Chechen or Dagestani Jihadists.

Video is NSFW, so click the screen to play:

The Chechen militants who engaged the machine gunner were affiliated with the militant Sunni Islamist group Kata’ib Ansar al-Sham. Supporters of the Levant Battalions in English, the group is active in the ongoing Syrian Civil War and largely engaged in combat with Syrian government forces. However, the group is friendly with both al-Qaeda and ISIL forces.

The footage is undated. But judging from the video quality and the history of the group who carried out the attack it’s likely to date to sometime between the Latakia offensive of 2014 and the downfall of Ansar al-Sham in 2018.

The Syrian Militant Group Led by a Chechen

Ansar al-Sham was founded in 2012 as the Syrian Civil War degraded into all-out open warfare. The founder of the militant group was a Syrian named Abu Omar al-Jamil who was a veteran of the Soviet-Afghan War. Initially, al-Jamil formed the group by gathering conservative Syrian Sunni Muslims. However, the group soon opened to foreign fighters.

The military leader of the group is one of these foreign fighters. Abu Musa al-Shishani was born in Chechnya and managed to recruit various Jihadists from Chechnya to the group. Musa Abu Yusuf Shishani can be seen on the right in this photograph alongside fellow Chechen militant Salahuddin Shishani.

The stated aim of Ansar al-Sham is to topple the Syrian government of Bashar al Assad and replace it with an Islamic state. However, the Islamist ideology of the group has been described as vague which has also assisted the militant group in recruiting Sunni Syrians from various backgrounds and beliefs.

The group was aligned with the Free Syrian Army who was said to have donated over half a million dollars to Ansar al-Sham during the 2014 Lattakia offensive. Ansar al-Sham subsequently played a leading role alongside the FSA in the offensive against Syrian government forces.

The group fell from power with the emergence of rival militant group Tahrir al-Sham (HTS) in 2017. This was the same group who used a drone to film their men crushing fleeing Daesh members with a Soviet-made battle tank. After initially joining HTS shortly after their foundation, relations soon soured.

In 2018, during the early hours of the 23rd of August, various Ansar al-Sham headquarters and positions in the northern Latakia mountains were raided by HTS and fighters from the Turkistan Islamic Party. Despite some initial gun battles erupting, Ansar al-Sham commanders refused to fight. They then handed over their headquarters, which contained a large number of weapons and ammunition, to HTS forces.

For more information on Chechen militants operating in Syria, I highly recommend checking out the site Chechens in Syria. A website that focuses on the tracking of foreign fighters of Chechen origin fighting in the Syrian Civil War.