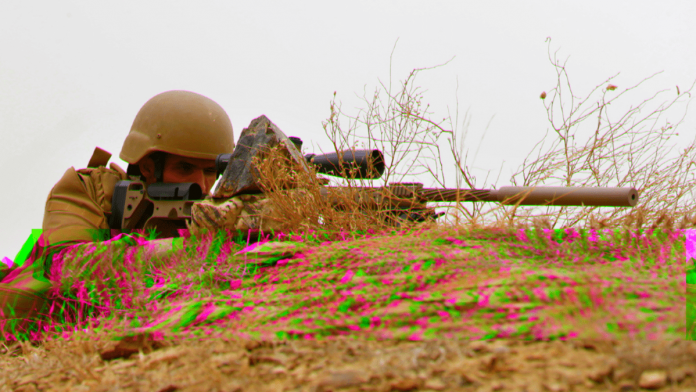 Warning – Graphic footage: The following combat footage comes from the ongoing civil war in Yemen. It’s shot through a sniper lens observing a Houthi position. As a Houthi fighter peeks out from the side of a series of ammunition boxes, he is fired at by a Saudi-led coalition sniper. The round subsequently removes his scalp.

Whilst the video is entitled that the location is unconfirmed, the coalition sniper is seen to be wearing what looks like Saudi military camouflage. Thus it is a high probability that this is was filmed somewhere in Yemen where the Saudi-led coalition is currently waging war on Iranian-backed Houthi forces.

THE COALITION SNIPER FOOTAGE WAS FILMED IN THE WAR IN YEMEN

The combat footage of the Saudi sniper hooting the Houthi militant was one of many incidents encompassed in the ongoing Yemeni Civil War which erupted back in 2015. It’s a conflict that is largely fought between two factions: the Yemeni government led by the Abdrabbuh Mansur Hadi and the Houthi armed movement, alongside their supporters and allies. Both sides claim to constitute the official Yemeni government.