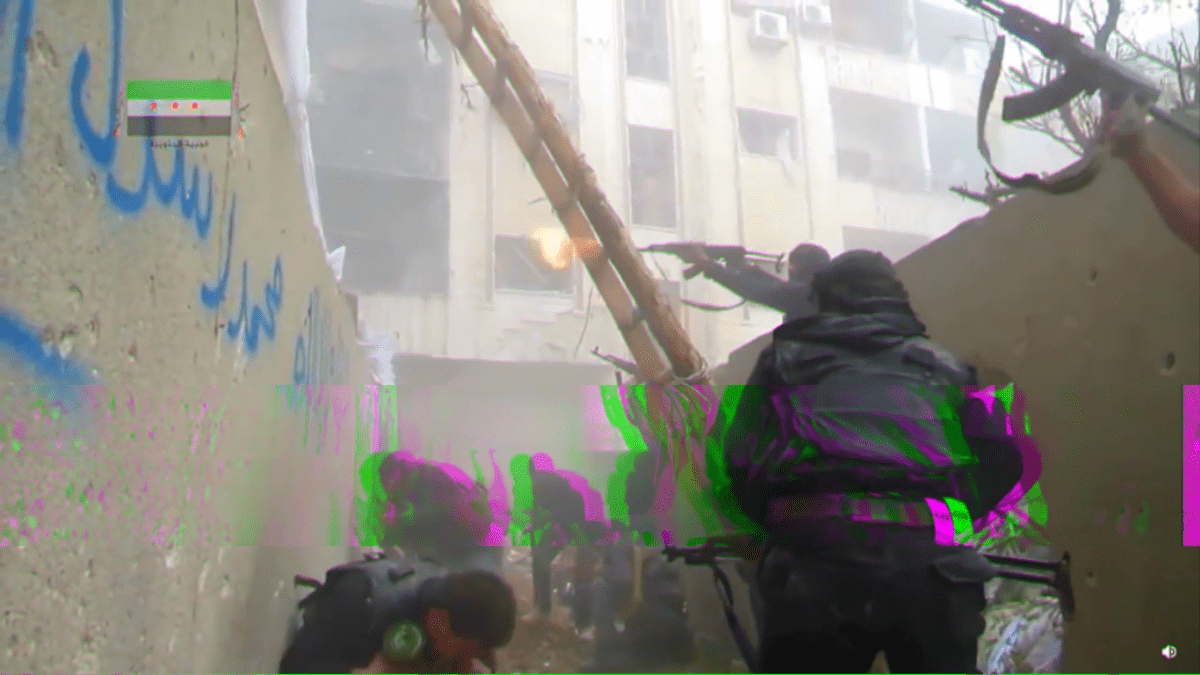 The following graphic combat footage shows the infamous bloody ladder assault that took place in Darayya, a suburb of the Syrian capital of Damascus. It shows fighters of the Free Syrian Army (FSA) using a crudely made ladder to assault a building full of Syrian Arab Army (SAA) troops. The intense fighting led to numerous casualties and the ladder being soaked in blood. If you look closely around the 0:60 mark, you can see a severed human foot on the ground as a result of the fighting.

First shared by Orient TV at the height of the Syrian Civil War, the combat footage of the bloody ladder assault was shared massively amongst those following the conflict. Before becoming buried in the mass of other combat footage from Syria until resurfacing recently on Reddit. The incident was one of many bloody events and graphic combat footage encapsulated in the long running battle for Darayya.

The Battle of Darayya

Darayya was one of the first suburbs around the Syrian capital of Damascus to see demonstrations erupt against the regime of Bashar al-Assad. The city is seen by many Syrians as a symbol of the uprising against the Syrian regime. As a result, the town became a vital territory to capture for both sides in the Syrian Civil War. It was subsequently the hub of examples of graphic combat footage.

After the outbreak of the conflict in 2011, Syrian rebels made significant attempts to form a rebel stronghold there. Forces of the Syrian Arab Army then led a campaign to clear the Damascus suburbs of rebel forces which initiated a bloody fight for control of Darayya in particular.

Amidst the carnage of the SAA campaign, a mass slaughter took place that saw around 500 mostly civilian people executed. The perpetrator of the massacre was never truly confirmed with both the Syrian rebels and the Syrian government forces pointing the finger at each other.

Whilst rebel forces had initially been forced out of the center of the city, the massacre of Darayya saw the rebels regain control a few months later. What followed was a brutal siege of the city that went on for four years. Whilst most of the 170,000 civilians living in the town before the war fled, any who remained lived amongst constant urban warfare, shelling, and all-out carnage such as that seen in the combat footage of the bloody ladder assault.

“Darayya is a city of ghosts and dead bodies”.

Situated just 4 miles from downtown Damascus and right next to the vital Mezze Airbase, for government forces the control of Darayya was critical to ensuring the security of Damascus by crushing the rebel presence in the suburbs.

In 2016 after almost four years of brutal warfare fought over the town, the Syrian regime achieved its aim by striking a peace deal with the rebels. It was agreed that the rebels would be granted safe passage out of besieged Darayya and relocated to the rebel-held city of Idlib. The rebels began to lay down their arms and leave.

Whilst pro-regime media outlets hailed the deal as a victory for the Syrian state, the long defense of Darayya was also seen as a victory for the rebel forces who fought to defend the city against all odds. Additionally, the fighters had gained immense experience in urban warfare through the siege of Darayya. Experience which was utilized during the fight for the decisive Aleppo campaign of 2016.

Some news outlets, like Russia Today, fittingly referred to the long-running and grueling campaign to capture the city as “Syria’s Stalingrad”. Embedded with the forces of the Syrian Arab Army, they described how “years of ruthless warfare transformed rookie soldiers into battle-thirsty experienced veterans. Quiet confidence replaced a gloomier outlook as soldiers expected to fight the war to the bitter victorious end.”