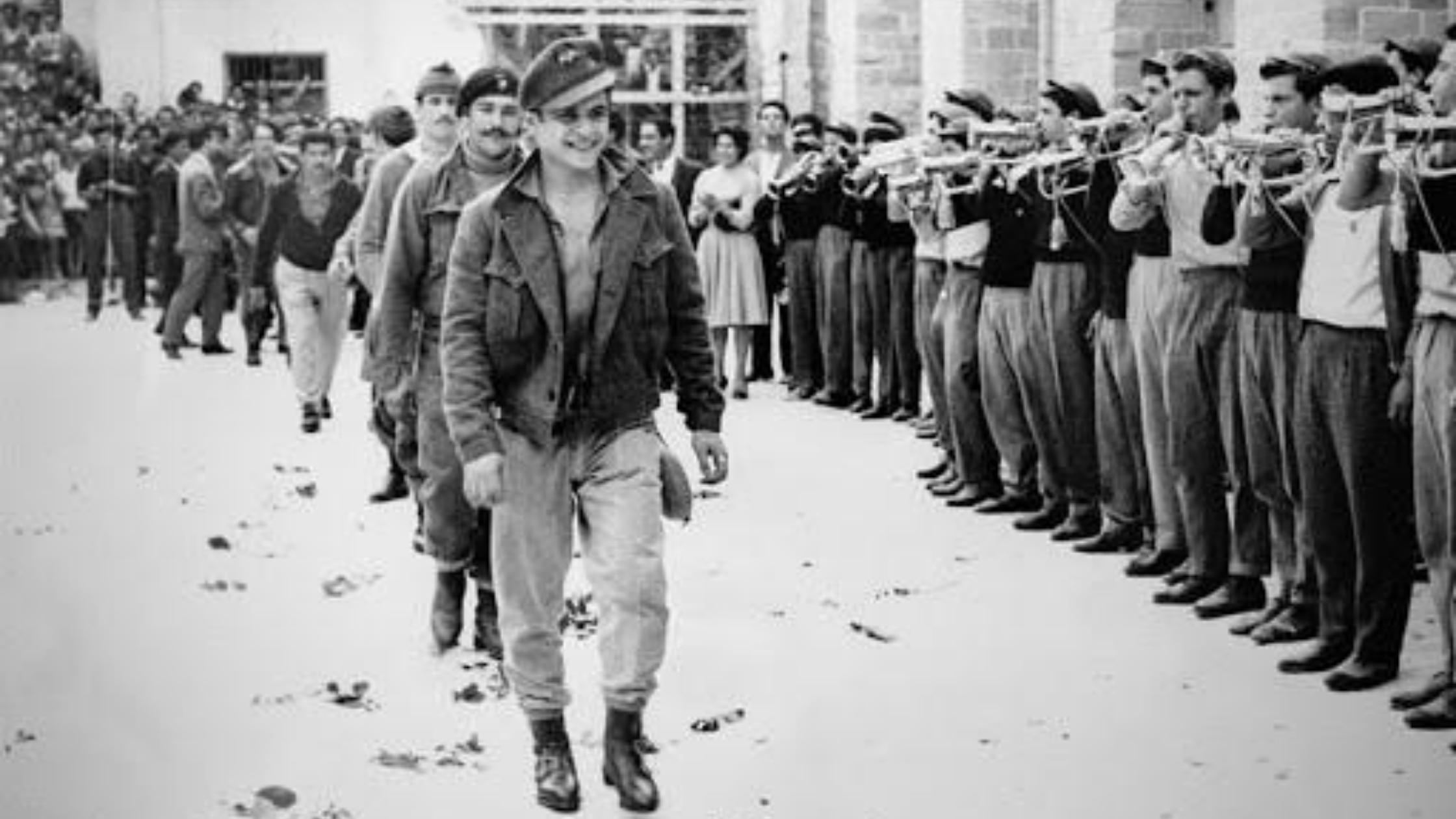 The struggle for independence in Cyprus that took place between 1955 and 1959 was more than just your average post-WWII decolonization armed conflict. It’s a war of significant importance for all Greek Cypriots and a showcase of a range of truly exotic improvised explosive devices and improvised small arms, such as the MP-44 used by the EOKA.

When it comes to the weapons used in the Cyprus War, anything goes. From so-called “biscuit bombs” to reverse-engineered Sten and Sterling SMGs to Nazi assault rifles like the Sturmgewehr MP-44 that changed hands many times after being produced in WWII before subsequently making its way to Cyprus.

Those who play the Rust game are already familiar with the EOKA Warrior (the acronym for Ethniki Organosis Kyprion Agoniston, the Greek Cypriot nationalist guerrilla organization that fought against the Brits) and the EOKA pistol, an old fashioned and very crudely made “pistol” that used a 20mm caliber cartridge case as a barrel. On Reddit, some years ago, some Reddit users were reproducing EOKA pistols which are almost identical to certain pistols used in South Africa and Kenya.

In recent years, I have been systematically researching and examining the improvised weapons and explosives from the period of the EOKA armed struggle. What surprised me most was just how difficult it was to obtain reliable weapons as an EOKA fighter back in the day. It’s also surprising just how original the weapons manufacturing methods were on a small island like Cyprus, that’s remote from mainland Greece.

Of course, Greece played an important role in supplying the EOKA with all types of weapons, particularly WW2 weapons. Most of these weapons originated in the Greek-Italian War of 1940-1941, the German Occupation of Greece and the Greek National Resistance that raged between 1941-1944, the British intervention in Greece known as “Dekembriana”, and finally, the Greek Civil War that took place between 1946-1949.

As a result of this plethora of conflicts, the Greek-supplied weapons that were sent to Cyprus contained a wealth of international arms: Italian Breda LMGs, Lee Enfield rifles, MP-40 submachine guns, M3s and Thompsons, the famous Bren, and all types of Stens and Sterlings. Beretta 38 were also prominent weapons, a cut-down variant of this weapon was presented by Gun Jesus on Forgotten Weapons.

But amongst all of the various classic weapons that featured in the Cyprus War, the one that is arguably the most interesting is the famous German-made Sturmgewehr MP-44 which is critically acclaimed as “the world’s first assault rifle”.

The German MP-44 That Witnessed Everything

The story of how a German MP-44 ended up in Cyprus is a seriously interesting one. Today, this weapon is exhibited at the headquarters of the National Guard Special Forces. References to the weapon can also be found in General Grivas’ memoirs with the standardization “4 automatic Steyer with 4,000 rounds”.

The MP-44 in question has two serial numbers (5317/44 on the receiver and 5734 on the stock) and a stamp with the letter X. From the two serial numbers, one can ascertain that the stock is a later addition taken from another weapon. 5317, however, and the X mark also reveals something very interesting: That the weapon is a capture of the Red Army from the battlefields of the Eastern Front.

This explains the serial numbers and replacement of the buttstock, which was always a vulnerable point of the MP-44 due to the pressed screws. The number 5317 tells us that the weapon was originally made in 1944 in a Steyer factory in present-day Austria. So how did it end up in the hands of EOKA – given that this weapon ended up in Greece?

At this point, it is worth pointing out that historical research tells us no German unit stationed in Greece as part of the occupying force in the period between 1941-1944 carried this type of weapon. The MP-44 was adopted in mid-1944 by specific units of the German army on the Eastern and Western Fronts such as SS Viking, Gross Deutschland, 16th Panzer, Gebirgsjäger, and, after the autumn of 1944 towards the end of WW2, by the Volksgrenadier corps.

Given that the MP-44 in question is Soviet loot and that the Germans left Greece in October 1944, the journey that led to this MP-44 assault rifle ending up in Greece can be traced to the following route: Eastern Front – Yugoslavia – Greece – Cyprus.

In Yugoslavia during WW2, many Partisan and guerilla groups received captured German weapons from the Soviet Red Army as part of military assistance. This is evidenced by the presence of various MP-44 assault rifles in Tito’s Yugoslavia post-war. Given that Yugoslav partisans aided the Greek communists in the civil war, the most plausible guess that can be made is that the weapon ended up in the hands of the Greek Army as loot from the Greek civil war.

At the EOKA Struggle Museum in Nicosia, an exhibit shows spent rounds from the MP-44 that were fired in successful ambushes across Cyprus. Similarly, some very interesting French MAT-49s were also used by EOKA. These were stolen by the group outside a night club in Famagusta when the French troops arrived in Cyprus during the 1956 Suez Canal crisis.

The exotica of EOKA firearms and explosives go beyond the reverse-engineered Stens and Sterlings local DIY arm manufacturers produced. The EOKA utilized a series of curious IEDs, one of which was concealed in a biscuit tin. Today, it can be seen on display in the Imperial War Museum in London.

The tins were filled with home-made explosives and fitted with military ‘time-pencil’ switches which exploded 15 minutes after removal. This bomb was found with a fingerprint and led to a Greek employee of CBS to be arrested and charged.

Alongside the biscuit tin bomb, a range of pressure triggered and electrical mines, IEDs, and homemade mortars that fired explosive or incendiary devices were also used. To create such weapons, ammonium nitrate was needed and this is where local sausage factories came in.

As ammoniom ntriate is used as an ingredient in preserving cold meats, the EOKA utilized employees of Cypriot sausage factories to obtain it. Convieniently for them, the island of Cyprus is indeed popular, alongside halloumi cheese, for its local cold meat products.

Spearguns and a Venetian Helmet

The ingenuity of the EOKA when it comes to homemade guns can be seen through the Mares speargun that was crudely converted into a firearm. An early prototype Mares speargun used primarily for scuba fishing was cannibalized to create a Frankenstein type of a self-loading arm which was most probably a single barrel 12 gauge shotgun. Interestingly, the family business that imported such spearguns into Cyprus during the 1950s still operates today.

On another occasion, a fighter of the EOKA is said to have used a “Sallet” type of helmet originating from a Vetitian soldier as a means of protection. Given that Cyprus was under Venetian rule from 1489 to 1571, the choice of tactical helmet for this Greek Cypriot guerilla fighter was almost four centuries old when the EOKA struggle began in 1955.

Such helmets were widely used in Cyprus during the siege of Famagusta that was led by the Ottoman Empire between 1570-1571 and formed part of the wider Ottoman–Venetian War of 1570–1573. This Venetian helmet was either taken from a local museum or more likely a family heirloom that was recalled for war once again almost 400 years later.