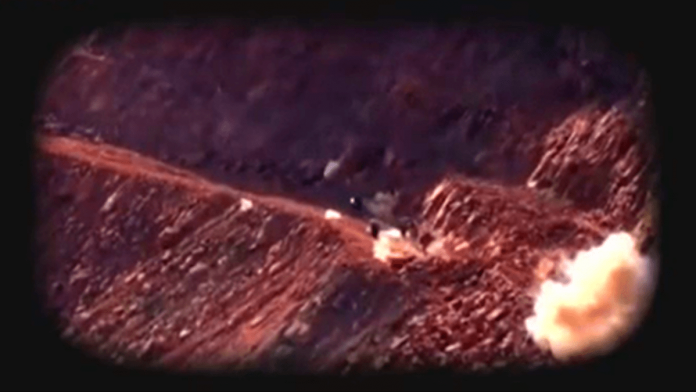 The following combat footage took place in a mountain range somewhere in Turkey. As a Turkish patrol moves along a lethal mountain road offering no cover, they come under a sustained ambush launched by PKK fighters. As they attempt to escape, the mountain around them is eviscerated with machine gun rounds causing one Turkish soldier to jump off the road and roll down the mountain in an attempt to escape the kill zone.

The exact casualties from this particular ambush are unclear. The route the men were ordered to patrol, stick between a mountain face and a sheer drop, proved to be lethal in such an attack. The only possible cover lay in the mountain bend, which was a long way to run. From the footage, it looks unlikely that any of the Turkish soldiers made it to the safe zone.

Who Are The PKK?

The ambush was carried out on the Turkish troops by a militant Kurdish group called the PKK. Formed in 1978, they are one of the most prominent militant groups who have been actively involved in the Turkish – Kurdish conflict that has been active for the past 42 years. Their main aim is to secure autonomy and increased political and cultural rights for Kurdish people living in Turkey.

Initially formed by a group of Kurdish students in late 1978, the ideology of the PKK was Kurdish nationalism with a mixture of revolutionary socialism and Marxism-Leninism. During that era, the group viewed the Turkish rule and capitalism as some of the main reasons for the oppression of Kurds in Turkey. So their main aim was to carve out an independent communist Kurdistan.

This extensive oppression only served to bolster membership of the PKK. Primarily with people who aimed to establish and defend linguistic, cultural, and political rights for the Kurdish minority in Turkey. Armed confrontations between the PKK and the security forces of Turkey had been occurring since the group’s formation in 1978. It wasn’t until the mid-1980s, however, that the insurgency reached new levels.

“A society can never be free without women’s liberation.”

On the 15th of August 1984, the PKK announced what they called ”The Kurdish uprising”. This soon saw a widespread insurgency erupt between the Turkish Security Forces, the PKK, and various other Kurdish militant groups. To date, the conflict has killed over 40,000 people. The majority of whom were civilians of Kurdish ethnicity.

In 2013, a ceasefire deal was struck between the Turkish government and the PKK. One of the conditions of the peace deal was that the PKK begin to withdraw its militants from Turkey and move them into Iraqi Kurdistan. However, the ceasefire collapsed in the summer of 2015 and the conflict resumed.

The following year, the PKK aligned themselves with the Peoples’ United Revolutionary Movement. This movement was an alliance of ten leftist, revolutionary socialist and communist Turkish and Kurdish organizations from across Turkey. Their main aim was to overthrow the Turkish government under Erdoğan.

Is the PKK a Terrorist Group?

Throughout the conflict, both sides have been actively involved in abhorrent tactics that target civilians. For example, Turkey has engaged in scorched earth tactics of burning entire Kurdish villages to the ground under the pretext of hunting PKK militants. The PKK has launched bomb attacks on various civilian areas of Turkey.

As a non-state group, the PKK has been designated as a terrorist group by Pakistan, Iran, the EU, NATO, Israel, and of course, Turkey. The designation of the PKK as a terror group, however, has been controversial for a long time. Various international groups, prominent figures, and NGOs have routinely claimed that the PKK doesn’t actively engage in organized terrorist activities, or systemically target civilians.

Last year in 2019, the PKK was branded as an “internal armed conflict actor” instead of a terror group by a Belgian court. However, in 2020 the Belgian Government announced that the ruling would not affect the country’s current designation of the PKK as a terrorist group.