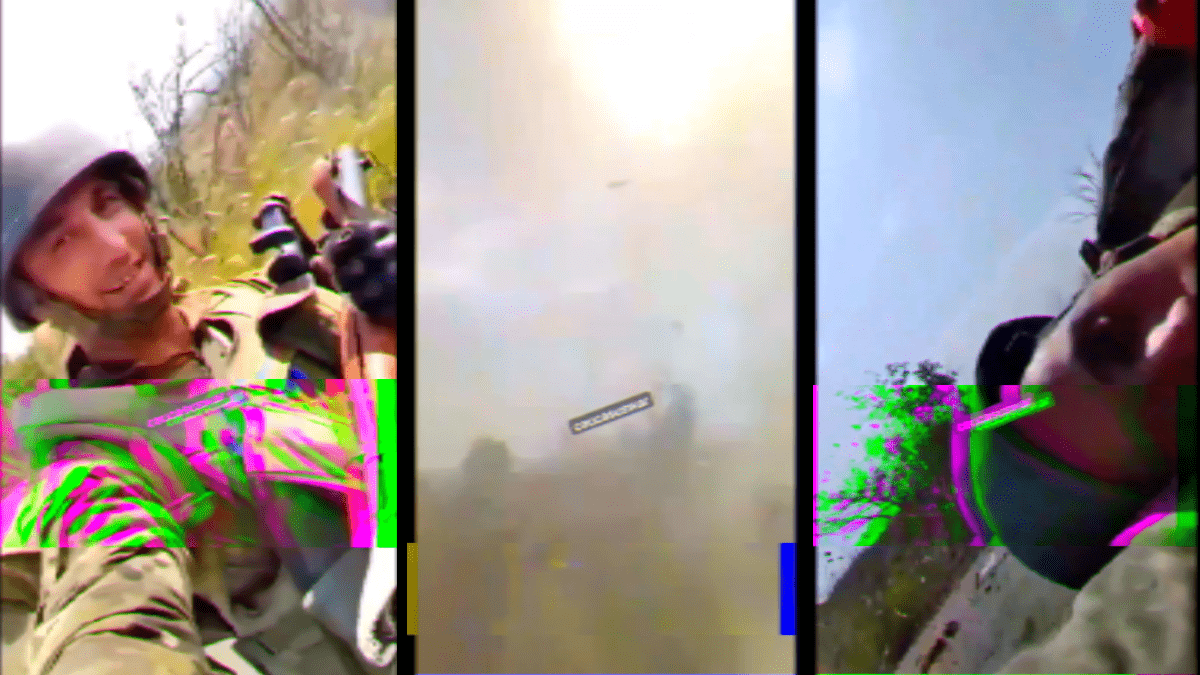 The following combat footage was captured on the selfie stick of an Azerbaijani in the recent Nagorno Karabakh conflict. It shows a column of Azeri troops marching behind a T-72 in casual fashion with some laughing, joking, and sipping on Fanta Lemon. The men are suddenly eviscerated by a rain of shrapnel stemming from a rocket fired at the T-72 leaving them on the ground, shell shocked and surrounding by debris from the tank.

Click the video to play if it doesn’t play automatically.

Whilst I initially assumed the attack was a result of a landmine, RPG, mortar, or similar, eagle-eyed Reddit users on the Reaper Feed R/Warposting forum soon pointed out that the attacker is visible at 1:01 into the video. He can be seen raising his head above the mound at the left side of the road followed by the flash of an RPG round.

The bulk of the rocket-propelled grenade blast appears to have been caught by the Explosive Reactive Armor (ERA) fitted onto the Soviet-era T-72 tank. However, the Azerbaijani soldiers behind, including the soldier filming the incident on a small selfie stick, are unprotected from the shockwave and the resultant shrapnel of the blast. The exact number of fatalities is unclear.

The latest conflict in Nagorno Karabakh took place in a disputed region that has been in a state of limbo since an initial grueling armed conflict during the collapse of the Soviet Union. Taking place in the age of social media, the selfie stick, and drone warfare, it has arguably been one of the most brutal, unique, and eye-opening conventional conflicts of the 21st Century.

Described by some as a video-game war, the conflict was defined by conventional warfare of tanks and troops mixed with drone warfare, social media, and ready access to the frontline footage. This resulted in a mass of footage of drones wiping out hundreds of troops on both sides, horrific war crimes, and harrowing clips of refugee columns. In the blood-stained aftermath, over 6,000 people, both soldiers, and civilians, lay dead.

The latest conflict in Nagorno Karabakh erupted on the 27th of September this year. It took place between Turkish backed military forces of Azerbaijan and the combined forces of Armenia and the military forces of the mostly ethnic Armenian Republic of Artsakh. The opening stages of the war comprised of military clashes along an area known as the Line of Contact that dates back to the end of the first Nagorno Karabakh War.

“Turkey has long relied on proxy groups to stabilize its southern border with Syria as well as to push back on both President Bashar al-Assad’s regime offensives and the Syrian Kurdish YPG’s aspirations for autonomy and independence.”

The conflict rapidly escalated into full-blown conventional warfare that saw widespread use of drone warfare, heavy artillery and missile strikes, tank and infantry warfare, as well as propaganda, both official and unofficial, being spread massively in various forms of online information warfare.

Turkish involvement in the conflict was seen as a route to expand Turkey’s influence in the South Caucasus, by increasing the standing of Azerbaijan in the war and by reducing Russian influence over the strategically vital region. Turkey was also accused of deploying hundreds of mercenaries from Turkish-backed militias in Syria to fight alongside Azerbaijan. These soldiers of fortune are believed to make up 541 deaths of the conflict according to the Syrian Observatory for Human Rights.

As the body count of the war began to skyrocket at an alarming rate, the United Nations made repeated calls to de-escalate the war and bring both sides to the table in order to stop the bloodshed. This resulted in three ceasefires that were brokered by Russia, France, and the United States. All three, however, outright failed to stop the conflict and the gruelling warfare carried on until the capture of the strategic town of Shusha by Azeri forces.

Shusha, a large elevated settlement located near the Artsakh capital of Stepanakert has been under Armenian control since the end of the First Nagorno Karabakh War. It’s said that “whoever controls Shusha, controls Nagorno Karabakh”. The city was captured by Azeri forces on 8th of November following a 3-day long battle.

The fall of the city led to Armenian military forces having to accept a brutal defeat. Two days later on the 10th of November, a ceasefire was signed by Armenia, Azerbaijan, and Russia. The terms of the ceasefire meant the lines will stay drawn as they currently stood. This meant Armenia lost the majority of territory in Nagorno Karabakh and was forced to return surrounding territories it captured during the first war in the 1990s to Azerbaijan.

Additionally, Azerbaijan was also granted land access to the Azeri controlled enclave of Nakhchivan which borders both Turkey and Iran. In an attempt to maintain the ceasefire and prevent further bloodshed, a force of over 2,000 Russian military peacekeepers have been deployed for at least the next five years.

The end of the war brought harrowing images of Armenians being ousted from their homes before the land was handed over to Azeri forces. Rather than hand over their homes to their sworn enemy, many chose to burn them down before joining refugee columns back to Armenia.

The presence of Russian peacekeepers has not guaranteed an end to violence, however. Various flareups have been reported that have left Armenian and Azeri soldiers. Both sides point the finger at each other in accusations of attempting to reignite the conflict.