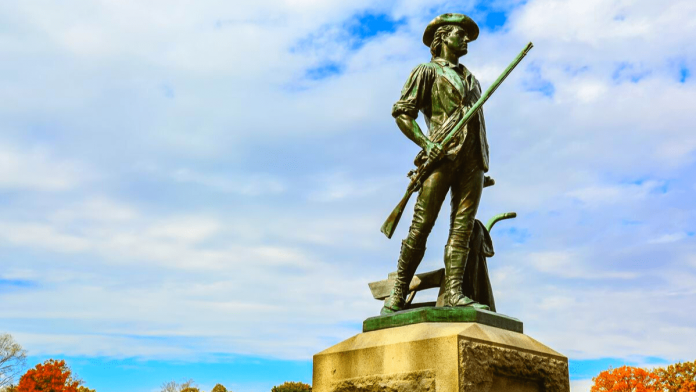 Prior to the outbreak of the battles, dissent had long been brewing between the forces of the British Crown and those living in the 13 American colonies of the time. The night before the battle, British soldiers in Boston began to mobilize and march upon the town of Concord. Their mission was to capture a stockpile of weapons that were being used by revolutionary forces. However, the British lost the element of surprise when an alarm was raised.

Alerted of the impending British attack, colonial militiamen raced to intercept the British forces and faced off with them on the town green of Lexington on the 19th of April, 1775. A firefight erupted which seen degenerated into intense gunfire, forcing the British to retreat. The US Revolutionary War started at this battle site on the 19th of April, 1775. It was followed by numerous other armed confrontations, battles, and sieges.

The colonists suffered relatively low casualties at of the Battles of Lexington and Concord. This was a major morale boost that proved they were capable of taking on one of the most powerful military forces on earth at that time. Eight years later, in 1783, the colonists gained their independence from Great Britain.

The US Revolutionary War started at this battle site, what does it look like today?

The US Revolutionary War started at this battle site and thankfully, the historical significance of Lexington and Concord has not been forgotten. Today, it is well maintained as a national historic site and features historic monuments, a visitors centre and more.

Today, the site is home to a dedicated walking trail associated with the iconic battle. It begins at the Marrett Road visitors centre in Lexington. Here you can watch a short movie to get a historical background of the battle and the significant sights that lie ahead of you.

After the movie, you can then begin the walking tour which includes stops at the site where Paul Revere was captured by the British, the iconic Minute Man Statue, and Concord’s famous North Bridge. In addition, there are also various farms and structures of historical significance along the way. Guided tours with a local tour guide are also available if booked in advance.

The US Revolutionary War started at this battle site, it is rich with war history and as such is well worth a visit. To find out more and get resources to plan your trip, you can visit the American Battlefield Trust which has a wealth of information about the battle site at Lexington and Concord.