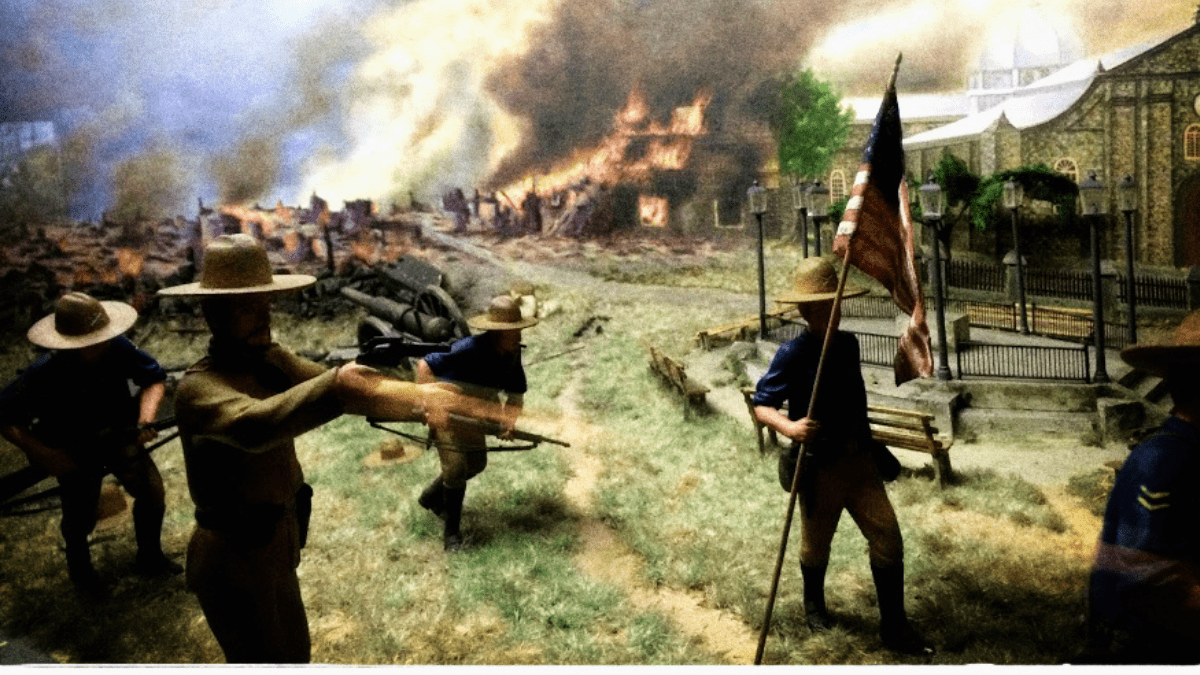 Counterinsurgency (COIN) is one of the most well-known strategies and tactics in modern military history and theory. It has spawned hundreds of books on the topics from military officers, intelligence officers, academics, military analysts, and armchair generals.

We can see examples of U.S. counterinsurgency most prominently in the Wars in Afghanistan and Vietnam, yet others can easily be found in The Banana Wars of the early 20th century, U.S. Intervention in Somalia, and the Indian Wars in the 1830s.

However, one extremely important example of counterinsurgency (and one of the United States’ most important conflicts in Asia), often gets overlooked in U.S. military history. It is the Philippine-American War of 1899 to 1902.

Background to the forgotten war

The Philippine-American War was born out of the Spanish-American War of 1898. The quick conflict, between the United States of America and the Kingdom of Spain, was also part of two larger movements, the War for Cuban Independence and the War for Filipino Independence.

Both the Cuban and Filipino peoples had been striving for independence for decades prior to the 1898 war, engaging in violent and non-violent, covert and overt forms of warfare and protest against the Kingdom of Spain.

Given Cuba’s close proximity to the United States and the “long-held U.S. interest in ridding the Western Hemisphere of European colonial powers and American public outrage over brutal Spanish tactics”, many Americans found themselves supporting the Cubans in their quest for independence. Among these were Theodore Roosevelt, William Randolph Hearst, and Joseph Pulitzer who were strongly asking Congress to declare war upon Spain.

Eventually, the explosion of the U.S.S. Maine in Havana Harbor spurred American military intervention and resulted in the U.S. passing a resolution that demanded that Spain allow the Cubans independence; in response, Spain declared war upon the United States.

The conflict was short, with the U.S. winning eleven days after war was first declared when “the Spanish Pacific fleet in Manila Bay was defeated by the U.S. Navy in swift strike made by Commodore George Dewey”.

Within days of the peace treaty being signed between Spain and the U.S., “fighting broke out between American forces and Filipino nationalists led by Emilio Aguinaldo who sought independence rather than a change in colonial rulers”.

The Filipinos, who had been fighting for decades for independence against the Spanish, were deeply upset at this as they desired their independence, not come under the subject of another nation’s rules and laws.

Though war officially broke out in February of 1899, there were small skirmishes between August of 1898, in which Emilio Aguinaldo and the other Filipino freedom fighters were largely hoping for anti-imperialist political changes in the U.S.

In short, there are two phases of the Philippine-American War; “The first phase, from February to November of 1899, was dominated by Aguinaldo’s ill-fated attempts to fight a conventional war against the better-trained and equipped American troops.

The second phase was marked by the Filipinos’ shift to guerrilla-style warfare. It began in November of 1899, lasted through the capture of Aguinaldo in 1901 and into the spring of 1902, by which time most organized Filipino resistance had dissipated”.

Like other examples of COIN from U.S. history, the United States was well funded and had a substantial amount of advantages. The U.S. had a well-trained fighting force comprised of active soldiers knowledgeable in basic military tactics and a strong logistical system for gaining weapons, ammunition, and other necessary forms of supply.

Finally, the U.S. had a strong Navy; at this time (and still today) having a strong Naval force is essential in any type of military strategy, counterinsurgency or not. With the Philippine-American War, the U.S. held tight control of the entire archipelago and the key waterways. Militarily, America had a strong advantage.

Aguinaldo’s Filipino forces, on the other hand, were more along the lines of the stereotypical freedom fighting, revolutionary force. They were “hampered by their inability to gain any kind of outside support for their cause, chronic shortages of weapons and ammunition” yet the Filipinos had other advantages. Aguinaldo’s Filipinos “had experience fighting this kind of conflict against the Spanish in 1896-1897…The insurgents were from the areas they were fighting in, spoke the language, understood the culture, and knew the terrain. There were groups of full-time partisans who operated in the countryside while a part-time militia remained in the towns. The Republican governor also established municipal and provincial governments and these later served as the insurgent underground government infrastructure. These shadow elements collected taxes, supervised the organization of supplies, gathered intelligence about the US Army, hid guerillas, and intimidated those that worked with the Americans”.

This guerilla war between the U.S. Armed Forces and the Filipino revolutionaries lasted from roughly November of 1899 to March of 1901. In March, the U.S. Army has been launching attacks from the Philippines’ main island of Luzon, acquired information about “the location of Aguinaldo’s secret headquarters from a captured courier…[Brigadier General Frederick Funston] and a handful of his officers posed as prisoners of war, marching under the guard of a column of Macabebe scouts [indigenous Filipinos working with the U.S.] who were disguised as rebels. Aguinaldo, who had been expecting reinforcements, welcomed the lead elements of the force only to be stunned by a demand to surrender”.

Aguinaldo’s capture by U.S. forces dealt a severe blow to the Filipino independence movement, especially when he pledged allegiance to the United States, though elements of organized resistance against the American occupying forces continued into 1906.

For the next forty years, until the end of the Second World War, the United States would play a controlling part in the daily life of the Philippines and would subject the Filipinos to increased brutality.

The Success of U.S. COIN Strategy

One of the primary reasons as to why the U.S. succeeded here (and why counterinsurgency often works) is the practising of small-unit leadership. In this conflict, “US Army junior officers were in charge of small garrisons in isolated districts where they were expected to pacify the area, create a local government, and engage in infrastructure development…They struggled, initially, to build municipal governments, as many of the townspeople were either supporting the guerrillas or were afraid of the guerrillas.  Despite the initial frustrations, stumbles, and failures, the junior officers adapted to the environment and began developing counterinsurgency efforts tailored to succeed in their areas…They collected intelligence; hired Filipino auxiliaries to assist them even when Manila did not support this policy; used policies such as crop burning, food rationing, and concentration to isolate the population from the insurgents; and developed ways to reward Filipinos who supported US efforts while penalizing those that did not”.

Otis shaped COIN policy at this time and “relied too heavily on civic actions and failed to end the insurrection”; by the time Otis was leaving his post, he was “convinced that the policy of benevolent assimilation, civic actions, and conventional military operations had won the war. He had always underestimated the magnitude of the rebellion and overestimated the appeal of benevolent assimilation, however, and failed to detect Aguinaldo’s shift to guerrilla war”.

His successor, Major General Arthur MacArthur (the father of notable American General Douglas MacArthur), kept some of these civic actions, yet also “implemented a tougher pacification policy… [this policy] combined with coordinated military operations, successfully weakened or ended the insurgency in most areas of the Philippines”.

Numerous other factors contributed however to the success of the Americans in the Philippines and the success of counterinsurgency in the Philippines. Primarily, according to Major Frank Andrews of the U.S. Army, “it was the development and implementation of a comprehensive counterinsurgency policy that addressed the political, social, and military aspects of the situation in the Philippines that eventually ended the insurrection…American commanders also recognized the importance of balancing the policies of conciliation and repression [and finally] The general weakness of the rebellion’s leaders also aided the Americans”.

However, this is not to say that mistakes were not made by the junior officers or commanders after Otis. Colonel Timothy Deady, a Civil Affairs Officer with the US Army Reserve, writing about the conflict in 2005 in Parameters, the journal for the U.S. Army War College, “There was no unity of command in political and military channels until MacArthur relinquished his posts and General Chaffee was subordinated to Taft…Various generals prematurely announced victory— attained or imminent—a number of times”. However, Deady also notes that, due to many significant missteps by the Filipino insurgents (little focus on broad popular support, failure to take the capital of Manila, neglecting to take advantage of unconventional warfare tactics and instead adopting a more conventional military tactic), the American military were able to overcome their own issues and defeat the insurgents.

What can the U.S. Learn from this War?

Certainly, small-unit tactics work highly effectively. These are imperative in any COIN strategy and allows military units to function far more effectively within a populace where insurgents are numerous. It allows for the soldiers within that platoon or company to become more enmeshed with the persons of that specific district or community, to know and gain their trust and create a positive relationship that would benefit both the local populace and American foreign policy.

Going forward in this new environment where small wars with special operations forces and unconventional warfare tactics become the norm, researching past conflicts and incidences where counterinsurgency has been tried is a necessity. Knowing and understanding where the United States has succeeded before, where the military has failed previously, and how they can better develop tactics for dealing with insurgencies and populaces where the enemy is unknown is key to preventing future calamities in places like Vietnam, Iraq, and Afghanistan.