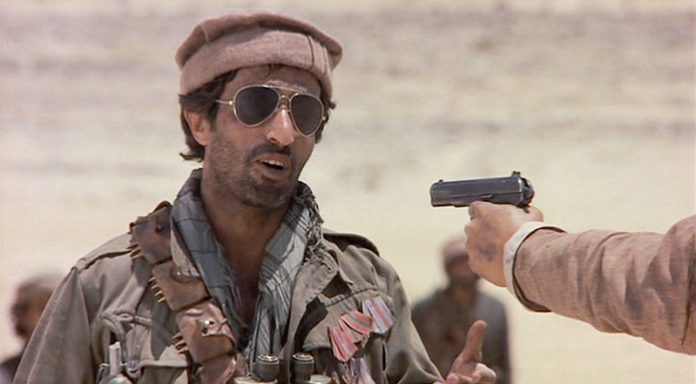 From Commando to Predator, I have a weakness for war and action flicks made in the 1980s. We’ve all seen Rambo III and nervously laughed at the infamous closing scene that states ”This film is dedicated to the brave Mujahideen fighters of Afghanistan”. Well, Rambo III wasn’t the only 1980s movie to jump the gun when it came to throwing praise and glamor to the then US proxy force of the Mujahideen in Afghanistan.

One of my all-time favorite 1980s movie is the lesser-known cult classic called The Beast of War. Set in 1981 and filmed during the height of the Soviet War in Afghanistan, the movie follows a Soviet T-55 tank crew and their charismatic Mujahideen adversaries during the Soviet-Afghan War. The Beast of War presents an awkwardly fascinating image of the Mujahideen which was then a US proxy force being used to cripple the Soviets. As we all know, times have drastically changed.

This article isn’t going to ruin the plot of the movie as I hope you’ll check it out for yourself. Instead, we’re going to look at the accuracy of the movie and the positive image of the Mujahideen painted by the movie that reflects a bygone era. An image that is impossible to see in US movies today as many members of the former US proxy of the Mujaheddin subsequently joined the Taliban and the word Mujaheddin became synonymous with attacks on US and other Western targets around the world.

The Beast of War wasn’t exactly a big hit when it came out in theatres back in 1988, but it later gained a cult status amongst military enthusiasts and veterans as a result of the accuracy and proper tactics used in the movie. To recreate the dry and dusty landscape of Afghanistan, the Beast of War was filmed in Israel. As a bonus, this gave the movie producers access to authentic Soviet T-55 tanks that had been captured by Israel during the wars in 1967 and 1973.

Another accurate point of the movie is the weapons used by the Mujahideen. Rather than bog-standard Kalashnikovs which are seen being carried by irregular forces in most modern movies, the producers of The Beast of War got it right. The actors in the movie carry everything from a traditional Afghan Jezail Musket to a British Lee-Enfield No. 1 Mk III.

In some scenes, you can see an extended muzzle nut on the Kalashnikovs used by the Mujahideen and the tank crew. These are Blank Firing Adapters used extensively by Israeli film armorers. In contrast, movie armorers in the US utilize blank firing adapters hidden in the barrel of the weapon.

The main Mujahideen characters are Taj and Moustafa. Interestingly, both of these former US proxy fighters were played by American and Israeli actors. Taj was played by Steven Bauer, the Cuban-American actor of Scarface and Breaking Bad fame. Moustafa was played by Chaim Jeraffi, an Israeli action who starred in the slightly less impressive line up of CSI: Miami and Sesame Street.

It’s worth noting that both of these actors speak Pashto in the movie. I was curious as to how good it was so I spoke to native Pashto speaker Ansar Akbar on Twitter who gave the following analysis on actor’s Pashto from the scene where Taj pulls a hidden Tokarev handgun from Moustafa’s belt and points it at his head.

“The actors tried their best to pronounce the words correctly. However, their expression, accent, and word selection are all out and often difficult to understand as a native speaker. Mustafa is the better Pashto speaker of the two.”

Pashto is far from an easy language. For a Cuban-American and an Israeli to try their best on screen is commendable in my opinion. Especially since this movie was made in the 1980s, we should be lucky that they aimed for accuracy instead of speaking in their native languages.

In the movie, Taj is on a revenge mission after the Soviet tank crew the film is based around obliterates his village and slaughters most of his family. He’s joined by Moustafa who is his loveable rogue cousin with whom he has a love-hate relationship that involves angrily sticking Tokarev handguns in each other’s faces. Together with a band of Mujahideen fighters, the pair pursue the lost Soviet tank, which they nickname ”The Beast”, through the valleys of Afghanistan in an action-packed escapade.

Whilst Taj has a Lawrence of Arabia vibe going on, Moustafa’s aesthetic is next level: the Pakora, the Aviator sunglasses, and a chest full of captured Soviet medals including the Order of Lenin are the phenomenal kind of accurate details that are often missed out so much in modern war movies.

In summary, the Beast of War is not only a cult classic but also a piece of history. It depicts an image of the Mujahideen of Afghanistan as ‘victims of Soviet oppression’. Of course, since the growth of the Taliban and the US invasion of the country, that perspective is now inherently out of date at least in the US.

Check out our Reaper Feed store, where you can find concept artwork of The Beast of War available to wear and show your love for the aesthetic of the Soviet-Afghan War.

This article is dedicated to the Hollywood producers who had no foresight of how geopolitics and their US Proxy in Afghanistan would play out.