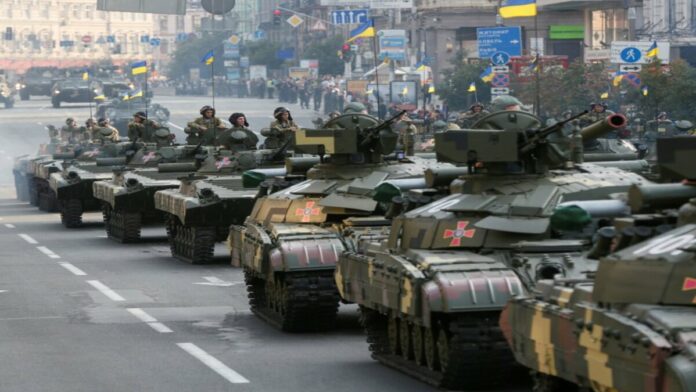 We are planning to do a number of articles to overview most of the tanks used in Russo-Ukrainian war. Let’s start with the main tank used by the Ukrainian Armed Forces, as this is where the story starts, chronologically. T-64 was invented at the Malyshev Plant in Kharkiv in 1963. Most people think that as the number advances, the tank gets better.

Strictly speaking, that’s not true. This tank, T-64, is the basis for all the Soviet tanks which came after it, and if you do not intend to read any further, we can say that T-72, T-80, and T-90 are all pretty much modifications and further development of T-64. And in a modern battle, how well the tank is upgraded is much more important. A well-modified T-64 will always beat an empty T-80 that has no reactive protection and old Soviet sights with no thermals.

But back to T-64. The T-64 is the parent of all post-war main battle tanks used by the Soviet Army. All the groundbreaking positives and negatives of the T-64 were passed on to the newer generations of tanks. And being at the very core of the machine design, they couldn’t be dealt with in full.

Anyway, as for the beginning of the 1960s, T-64 was literally a beast. No NATO tank could compete with the T-64, which had superior armor and armament. However, apart from the potential enemy, the tank was new and unusual for the own Soviet forces. Being used to the simpler engines of both the T-55 and T-62, the T-64 was a next-generation vehicle at this point. And this led to many screw-ups, which ended in burned out tank engines.

The tank was completely different from its predecessors, the T-55 and T-62 (which are effectively the same). Apart from a new and more complex engine, the T-64 has an auto loader, which required a complete change of the tank platoon structure, as now there were only three men in a tank’s crew. The new transmission was also faulty at the beginning and took some time to perfect.
Here are lists of both the negative and positive aspects of the T-64 tank (the majority of which were passed on to the T-72, T-80, and T-90).

+ 2A46 main gun. The caliber is not too big nor too small at 125mm. This cannon would go on to become a Soviet classic, appearing on all future tanks.

+ Anti-air turret. It was only installed on the T-64 and T-80UD. On a modern battlefield, with numerous UAVs flying overhead, having some sort of air defense is essential for a tank. It has to have automatic precision and shooting, which no modern tanks have at this time.

+ This one is more controversial, but in my opinion, T-80 and T-64 had the best tracks. T-72 tracks are oversized, which makes them very vulnerable to mud, which usually ends in tanks being left in a ditch.

+ Combined armor. The T-64 was the world’s first MBT with combined armor, and it was, of course, passed down to all subsequent models. Good fire control system (by Soviet standards). Without the FCS, it was impossible to shoot ATGMs through the main gun, hence the T-72 and T-72A, both of which didn’t have FCS, were unable to shoot ATGMs.

+ Best reactive protection design (Contact-1). If you look at the empty spaces it leaves on T-64BV and T-72B, you will see what I mean. It is small. much smaller than NATO tanks. It’s not always positive, as it’s not very comfortable for the crew inside, but it makes the tank a smaller target.

– It is small. Well, as mentioned above, there is not enough space in the tank. And when the tank goes into battle, the ammunition is loaded anywhere possible, as the auto loader only holds 37 rounds. A tank becomes a Jihad car in this manner because any strike into a tank with cumulative jet hitting ammunition will destroy the tank to ashes.

– Auto loader. It has two main problems. First, the lack of a fourth crew member doesn’t help in real war, as there is a lot of work to do on a tank and it is usually hard to maintain a tank with three people. The second problem is that if the tank is hit, the driver can’t get out of the tank—he has to remove two loads of rounds first.

– The engine was problematic. Well, Soviet engines were always falling behind their counterparts, but the main problem with Soviet tank engines is that the max speed for reverse is 5 km. This is just wrong. This was somewhat fixed in T-80.

At first, it was planned to make the T-64 the only main battle tank. And the idea was to produce them at all the main tank plants in the Soviet Union. But this did not work out. At that time, there was fierce competition between the main tank plants—Kharkiv, Leningrad, and Ural. Not all documented techniques and inventions were shared.

The Ural plant was not able to produce T-64 to the required standards. As a result, it was destined to produce T-72, a simpler, less expensive version of T-64.But it was a good tank for a potential mobilization, as more of them could be produced due to simplicity and cheapness. The T-80 was produced in Leningrad, Kharkiv, and Omsk. Essentially, it was an improved, modernized version of the T-64. but very expensive, which limits the amount of its production.

T-64A-one of the first versions, the one equipped with a 125mm gun. At first, plain T-64 tanks were equipped with 115mm cannons.
T-64B-main version of the tank. It had a 9K112 “Kobra” fire control system, which allowed the usage of ATGMs.
T-64BK-the commanding vehicle, with different radio frequencies available.
T-64BV–tank with Contact-1 reactive protection.

More on tanks:
Rebels Film Themselves Taking a Direct Hit From a Tank in Deir ez-Zor
Humvee takes a direct hit from a russian tank (and survives!)
T72 Tank Kindly Closes the Hatch of BMP-2 After Blowing it Open